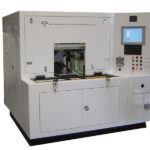 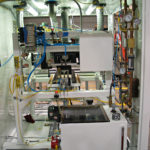 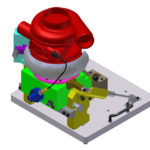 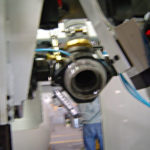 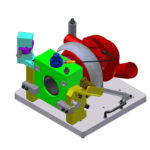 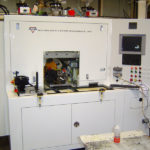 This machine production tests turbo chargers for full functionality using cold air. Surprisingly, not many OEM’s functionally test their turbo chargers before they leave the manufacturing plant despite the staggering number of warranty returns in the industry. This solution provides a sure-fire solution for accomplishing warranty reduction

A barcode scanner automatically reads the turbo as it is presented and ties this number to test results that are also stored on the machine for later retrieval. The turbo is tested for leakage in both the turbine and compressor housings as well as performance hysteresis, actuator response time and actuator oil consumption. High volume compressed air is used to spin the turbine while the pressure drop is controlled to a target. Mass airflow is measured on both the compressor and turbine side of the test part as well as air pressure, oil flow and oil pressure. The vane actuator RMS current is also measured.