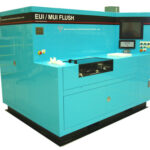 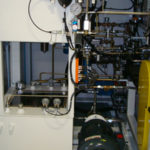 This EUI Injector Flush Bench was designed to flush debris and old fuel from warranty returned fuel injectors so that they won’t contaminate the test machines when they are evaluated for failure.

The EUI Injector Flush Bench also flushes out diesel fuel injectors that are returned under warranty to the OEM. Typically these returned injectors are filled with diesel fuel and have soot and contaminants in them from the engine environment. Running these on a production test bench without flushing would contaminate the calibration fluid in the tanks and require changing out the fluid afterwards – a risky proposition on a production line.