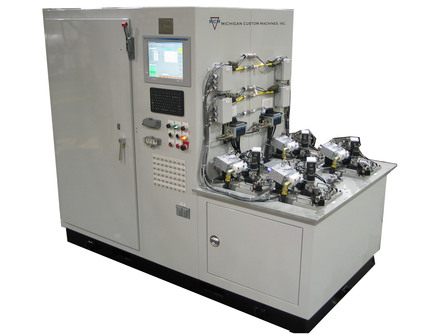 This four station engine testing machine is automatically loaded by robot on an assembly line and performs an end of line test on an EGR (Exhaust Gas Re-circulation) valve. Performance tests include mass airflow, hysteresis and step response and leakage. The vacuum drop across the part is controlled by the test machine at all times. The part is driven with MCM designed and built electronics.

The fixturing was designed to be modular and replaceable for future versions of EGR valves so that a complete product changeover could physically be done in a few hours. The robot program would accommodate two planned versions for part placement, but even reprogramming the robot in the future for something new would involve a minimal effort.